Should a term like “the slants,” which is deeply offensive to many Asian-Americans, be granted the benefits of heightened legal protection afforded to federally registered trademarks? Or should the Trademark Office have the power to refuse to register such a “disparaging” trademark?

This question was posed at the U.S. Supreme Court in January, when trademark law collided with the First Amendment as the Court heard arguments in In re Tam, a free speech challenge to the power of the Trademark Office to refuse federal registration for “disparaging” trademarks.

In In re Tam, a group of young musicians, all of Asian ancestry, sought to register “The Slants” on the federal trademark registry as the trademark for their rock band. The band could have used its trademark without registering it, but federal registration gives a trademark owner valuable benefits, including exclusive nationwide priority, a legal presumption that the trademark is valid, and broader legal remedies for infringement. A trademark like “The Slants” for a rock band is sufficiently distinctive and would otherwise meet the requirements for federal trademark registration.

The only impediment: Since 1934, when the Lanham Act was adopted, the Trademark Office has had the power to refuse to register trademarks that contain “immoral, deceptive, or scandalous matter” or, as relevant here, “matter which may disparage . . . persons, living or dead, institutions, beliefs, or national symbols, or bring them into contempt, or disrepute.” The Trademark Office has, over the years, refused registration to a number of trademarks it found “disparaging,” from its refusal in 1938 to register “Queen Mary” as a trademark for underwear, to its refusal in 2006 to register “Don’t be a Wet Back” as a trademark for seat covers. 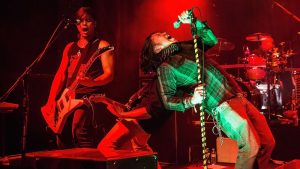 The Asian musicians in In re Tam deliberately chose “The Slants” as their band name because it was a racial slur, seeking to blunt the power of this language to hurt by using it, ironically, to refer to themselves. The band explained that by reclaiming an ethnic slur as their own trademark, they sought to show “ethnic pride” and call attention to discrimination against Asians. The Trademark Office, nonetheless, refused federal registration for the band’s name on the ground that other Asian groups find this term “disparaging.” The band appealed the registration refusal to the Federal Circuit.

At the time of the band’s appeal, both the Federal Circuit itself and the Fifth Circuit had rejected prior constitutional challenges to the statutory provision at issue. But timing, as they say, is everything: When the Trademark Office’s refusal of registration for “The Slants” trademark came up to the Federal Circuit, the appeals court, sitting en banc, used this case as an occasion to reverse its position. A majority of the court held that the Lanham Act provision allowing the government to deny federal registration to “disparaging” trademarks violates the free speech rights of trademark owners and is a facially invalid law (that is, there is no case in which it can be lawfully applied).

“The government has an appealing emotional argument, but the law will likely fall on the side of the free speech advocates. ~ Niki Kuckes”

The Supreme Court argument on January 18 aired the conflicting positions on both sides of a very interesting free speech debate.

Those arguing the pro-First Amendment position skillfully use the Trademark Office’s decades-long enforcement of this provision to demonstrate both the extreme subjectivity of the statute, and its inconsistent enforcement. Some of the prior registration refusals – for example, the Trademark Office’s refusal of the trademark “Bubby Trap” for bras in 1971 as “scandalous” – seem quaint in light of modern sensibilities, illustrating that terms like “disparaging” are inevitably subject to changing mores and social values.

Such a term is also prone to inconsistent application, even in similar cases. One notable illustration: The trademark “Have You Heard Satan is a Republican” was refused federal registration on the ground that it disparages the Republican Party. On the other hand, the trademark “The Devil is a Democrat” was allowed registration, based on a finding that this does not disparage Democrats. It is hard to see a defensible difference between such registration determinations (unless perhaps Democrats are much thicker-skinned as a group than Republicans).

Most importantly for First Amendment purposes, these parties argue that allowing the government to refuse registration where government officials find a particular trademark to be “disparaging”– a government regulation of private speech that is both content-based and viewpoint-based – chills speech by discouraging the use of such trademarks, and that it has no legitimate non-speech-related justification. As Justice Breyer put this point at oral argument, the law would allow a trademark owner to register a trademark that is complimentary to a minority group, but not one that is derogatory – even though this distinction has no apparent relevance to whether either trademark helps consumers identify the source of the goods (the ultimate purpose of trademark law).

On the other side of the First Amendment debate, the government argues for the constitutionality of the statute by emphasizing that by denying registration, the government has not suppressed any speech. Trademark owners are free to continue to use their mark for any and all purposes.  Refusing federal registration leaves the speech itself “uninhibited.” They argue further that in the Lanham Act, the government has simply dictated the conditions of participation in a federal benefits program. There is, they say, a fundamental difference between suppressing private speech, which is unconstitutional, and conditioning participation in a governmental benefits program, which is constitutionally permissible. As the government frankly puts its point, the “Constitution does not require Congress to open the federal trademark registration system to racial epithets.”

The government’s argument reflects a stark First Amendment truth:  While the free speech rationale may be easiest to embrace when “disparaging” terms are sought as trademarks by members of the minority group themselves – as in the case of “The Slants” – the position is far harder to swallow when it comes to the registration of trademark terms that insult or denigrate another person’s race, religion, or culture. The producers of lesbian-oriented television programming may feel strongly that they should be allowed to choose – and register – a slur about lesbians as the trademark for their show, such as “Dyke TV.”  But the same rationale also supports the registration of seriously hurtful trademarks, such as misguided jokes using slurs on those with intellectual disabilities, such as “Ride Hard, Retard” as a trademark for clothing.   (These are both actual trademarks that were refused registration as “disparaging”).

A final twist to the case that may interest sports fans: Lurking behind this dispute over an obscure rock band is a much bigger money case:  Pending litigation over the federal registration of the “redskins” trademark for the Washington Redskins professional football team. After years of successfully defending the federal registration of the Redskins trademark (in court at least), the team suffered a serious setback in 2015, when a federal district court in Virginia affirmed the Trademark Office’s cancellation of the Redskins trademark as a trademark that is “disparaging” of Native Americans. While the team sought to appeal this ruling directly to the Supreme Court in tandem with “The Slants” case, the Supreme Court rejected this effort.  The constitutionality of cancelling the “Redskins” trademark is now before the Fourth Circuit, which has held the case in abeyance awaiting the Supreme Court’s decision in In re Tam.

We will hear from the Supreme Court by the end of June whether the Trademark Office can, consistent with the First Amendment, reject registrations for “disparaging” trademarks. This author’s bottom line: The government has an appealing emotional argument, but the law will likely fall on the side of the free speech advocates.

Refusing federal registration for a trademark in effect sounds the “death knell” for that mark, which makes it hard to avoid the conclusion that this law chills speech, and does so based consciously on the content of a trademark and the viewpoint expressed. Nor is the trademark registration regime really akin to the relatively rare “government benefits” cases.

Those who may be disappointed with this conclusion can take solace in this: The First Amendment has often been interpreted to protect the rights of unpopular speakers. Indeed, this is its very glory.